Justina Tran: Orientalism, Power of Identity and the Spectacle Derived from Meme Culture 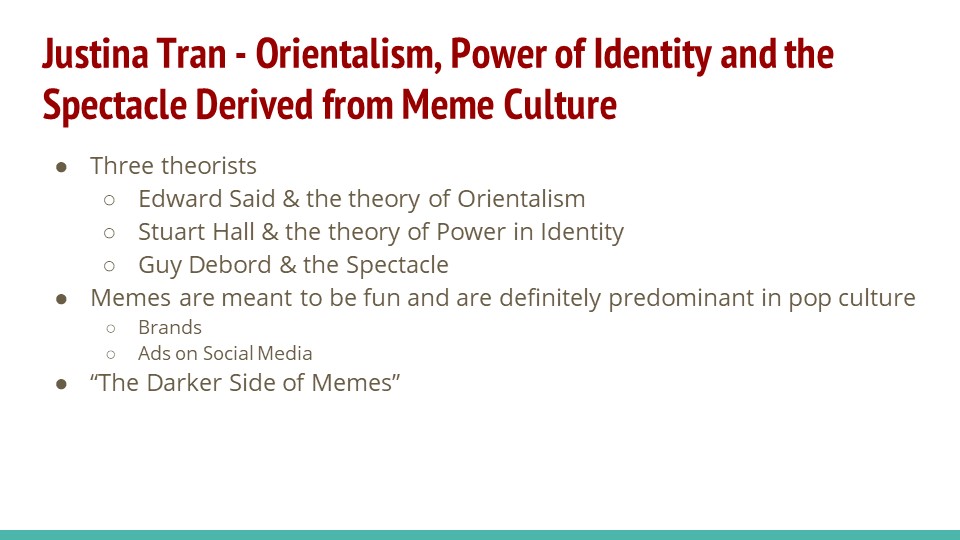 This is a blog dedicated to my written thesis composed in Fall 2021.

My written thesis was about how memes built their popularity and circulation off of stereotypes, racism and discrimination. In the first half of my paper, I combined three theorists’ works to describe this phenomena. Edward Said coined the idea of “Orientalism” in which the Western World views the Eastern world in a certain way based off of history of colonialism and white supremacy; Stuart Hall published the idea that your identity gives you power in society and your characteristics are what define your power; Guy Debord wrote mini excerpts warning society about the dangers of what he called “The Spectacle,” which is a concept that occurs when we consume too much media and replace it with reality. Media creates a spectacle and if we comprehend media as reality, it becomes dangerous.

I analyzed memes that were created during the pandemic when we were constantly fighting for human rights. I saw a lot of “digital blackface” which is a concept where people in the internet behave as Black people in order to be funnier or get attention. I also wrote about memes specifically pertaining to the Asian-Hate movement which came about because Asians were seen as the source of the pandemic. Memes are still being made about the corona-virus even though the number of cases are low and AsiaOrientalism, Power of Identity and the Spectacle Derived from Meme Culturen people are still being attacked to this day. The pandemic was an excuse for people to be racist and throw hatred towards Asian and Black people and that mentality was encouraged by Donald Trump, who’s son also contributed to the hate.

Because memes are everywhere, the world is becoming a scarier place fueled by racist comments hiding behind comedic relief. Just because something is written as a joke, doesn’t mean it doesn’t also promote discriminatory language. Memes are fun and I make memes about my friends all the time, but we also need to realize that there is a darker side to memes and it’s all fun and games until people are just outright racist. 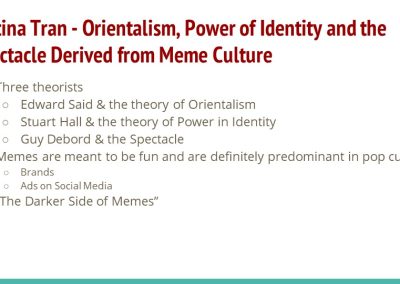 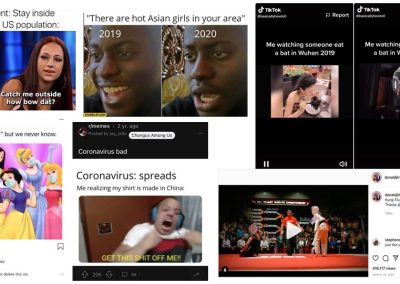