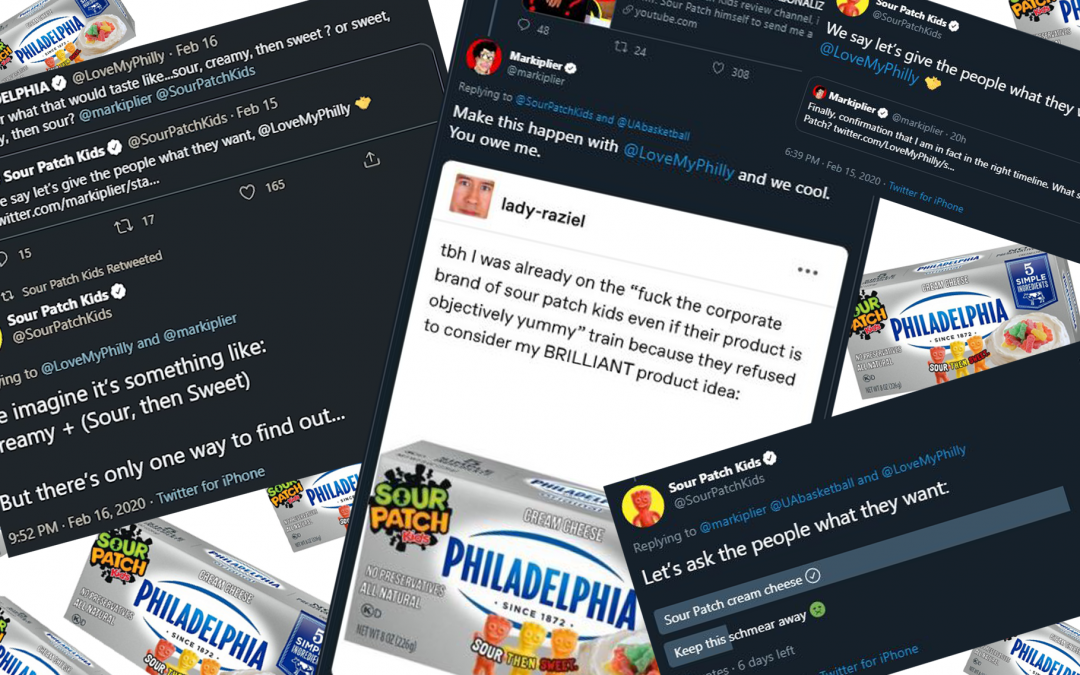 I think by far my favorite video that I’ve made this semester was one my first, and also one of the weirdest– Making my own SOUR PATCH CREAM CHEESE.

There’s kind of a backstory to this one, so let me explain. YouTuber Markiplier has been reviewing some of the various products that the Sour Patch Kids company has been releasing recently, like the Sour Patch Kids cereal and Gogurt for example. Earlier this year, Sour Patch did a PR campaign where they sent “gifts” to online influencers in hopes that the creators would make videos about it, and thus receive free advertising. Markiplier (real name Mark Fischbach) was one of the people to receive one of these, and he did make a video about it– but criticizing the strategy and pointing out how the company was basically trying to have people do brand deals but without, you know, actually paying for a brand deal.

In response to the video, I made a post on my Tumblr, joking that I was already against the Sour Patch Kids brand because they had refused to consider a product idea I had (which, of course, I’d never actually sent them) for a Sour Patch Kids flavored Philadelphia Cream Cheese, featuring an edit I’d made of a mock-up package for the product. I didn’t think much of it, I made ridiculous memes like this all the time just to share with my followers and other people on the internet.

What I didn’t expect, however, was that the official Sour Patch Kids would make a slightly petty tweet about the video that Mark had made, nor that Mark would respond back to them with his own tweet, featuring a screenshot of my terrible cream cheese post and a message: “Make this happen with @LoveMyPhilly and we cool. You owe me.”

That was wild enough, and left me mortified that I’d now kind of sort of publicly cussed out the Sour Patch Kids brand, but then it went even further. A few hours later, the official Philadelphia Cream Cheese twitter responded back, “@markiplier We’re here for it. @SourPatchKids, you in?”, to which Mark replied “Finally, confirmation that I am in fact in the right timeline. What say you, Mr. Patch?”

Now the ball was back in Sour Patch’s court, and I felt vaguely like I was in a terrible waking fever dream that I hadn’t quite decided was a nightmare or not because my joke cream cheese idea, which was created with the intention that it would be a product that NO ONE would EVER want and would be frankly disgusting, because people and actual brand twitter accounts, were discussing my creamy demon cheese.

And finally, Sour Patch had a response: “We say let’s give the people what they want, @LoveMyPhilly.” The twitter thread went on from there back and forth a few more times, and

ultimately ended with Sour Patch Kids putting a poll up on their page to “ask the people what they want”– Final results: 87.9% for the cream cheese, 12.1% against after a week of voting.

So, after this whole debacle, and also feeling more than slightly responsible, I found myself wondering, what would a Sour Patch Kids flavored cream cheese actually taste like? Thus I took it upon myself to make the cursed cream cheese and inflict my own creation upon myself, and make a video about it in the process.

It was definitely one of the more fun things I’ve done this semester, and spoiler alert: the cream cheese I made wasn’t actually half bad, and it just goes to show that even the things you think are going to be terrible and never going to work might actually turn out ok in the end after all.