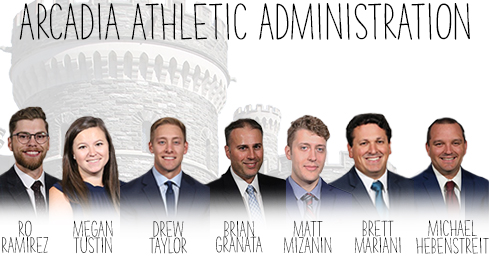 A lot of the time in collegiate athletics, support staff and administration fly under the radar. Without the Athletic Directors, Facilities and Events Coordinators, Sports Information Directors and Coordinators of Campus Recreation, athletics and recreation at a college level would not function. At Arcadia, the athletic administration not only helps our collegiate athletics run smoothly, but also takes the time to get to know student-athletes who walk through the doors of the Kuch Center.

Executive Director of Athletics and Recreation Brian Granata joined Arcadia as the third Athletic Director in school history in 2012. Throughout Granata’s tenure, the Scarlet and Grey have improved to become competitive not only in the Middle Atlantic Conference, but also on the national stage.

“The class of 2020 has helped deliver so many program firsts across a number of sports,” remarked Granata.

To the seniors, Granata says, “Thank you! Thank you for your hard work and dedication throughout your time at Arcadia. Being a Division III student-athlete is a privilege. It is hard work. It is not for everybody. It takes incredible sacrifice academically, athletically, and socially. Many times, it means missing out on fun or important things while you practice, compete, travel, lift, review game film, rehab, and more.” 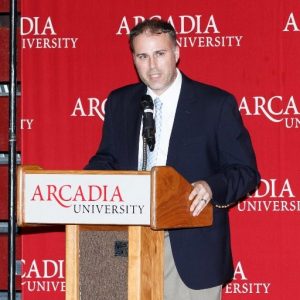 “All of that hard work does not go unnoticed. I also feel that being a Division III athlete will set you up for success professionally because of the life skills you have developed. Please know that you will always have a home at Arcadia.”

Granata added, “To our spring sport seniors, I want to say I’m sorry. I’m sorry we never saw you have a chance to compete and have your Senior Days. We could have never expected this spring to end the way it did. The coronavirus pandemic has truly changed the way we live. Thank you for all you have done to raise the level of Arcadia Athletics. Live each day to the fullest. As we learned so difficultly, we don’t know when it will be gone.”

Brett Mariani became an Assistant Director of Athletics at Arcadia in the summer of 2019. When asked about the class of 2020, he said, “I’m new to Arcadia this past summer, so this is my first senior class and they were incredibly warm and welcoming to a newcomer. Coming to a new institution, you never know how you’ll be received, and I couldn’t have been more impressed by the seniors who welcomed me in and made me feel like part of the Arcadia family.”

“Coming as an outsider, I have watched Arcadia from afar, and the progression of the department is directly attributable to the senior class,” remarked Mariani. “You have made an incredible impact on the University and the department, and your legacy will continue to live on.” 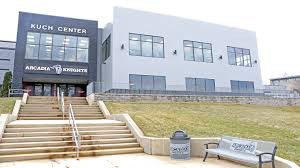 When asked about what the department will miss about the seniors, Mariani said, “They were a very calming and steadying presence on campus and around the building. Seniors have an incredible amount of value on individual teams, but also across the entire department.”

Michael Hebenstreit was named an Assistant Director of Athletics in the summer of 2019, but has served in numerous roles in Arcadia’s Athletics department since 2013. When asked about the impact of the class of 2020, Hebenstreit said, “The class of 2020 is one of the first classes to experience high success throughout their four years of being a student-athlete.”

“Many of the student-athletes in this class took a leap of faith in joining a rebuilding program, and many are leaving having playing in a conference championship game as one point in their playing career. They have also helped push the incoming classes to continue to work hard to sustain the success that many of the 2020 senior student-athletes experienced.”

Hebenstreit says to the seniors, “Thank you for the hard work that you put in over the last four years to make this department one of the strongest all-around departments in all of the Middle Atlantic Conference.” 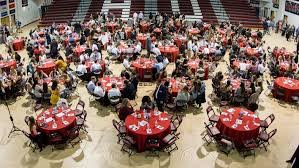 When asked about what the Athletics department will miss about the seniors, Hebenstreit said, “Their personality outside of the playing field. It’s great to walk through the gym and have a conversation about something other than the sport they played, or the result of last night’s game.”

“Their willingness to help out in any capacity is something that will be missed, but because of their work ethic, it was passed down to all of the younger student-athletes.”

Hebenstreit remarked, “All the seniors left their mark in some way, shape or form.”

Megan Tustin joined the Arcadia staff full time as the Coordinator of Facilities and Athletic Events for the 2019-2020 academic year, after being hired in the summer of 2017 through the NCAA Division III Ethnic Minorities and Women’s Internship Grant.

Tustin addressed the seniors, saying, “You are not alone and we are so proud of you. So many seniors are feeling so lost and feeling like they missed out on their senior year experience. Even though we cannot honor you all in the traditional way, we are still proud of all of you and each of the experiences you’ve had throughout your four years. When this is over, we will honor you!”

When asked about the impact of this senior class, she said, “The class of 2020 has been a part of breaking records within the athletic department, both with their teams and as individuals. Conference championships, leading scorers, top race times, conference records, and so many more.”

“So many records that have been broken, each pushing the individual programs and department forward and bettering the competition. Some of the seniors have lead their programs through multiple coaching changes, never wavering in their commitment to their teams.”

Tustin said the department will miss the individuals in the class of 2020, as well as their leadership.

“These seniors have meant to much to so many coaches and staff, and they will be truly missed,” she said.

“Vee has overcome so much throughout her four years,” Tustin remarked. “She has fought through so much all while staying on top of her academics to prepare her for law school. Vee, I’ve told you this before, but be patient and believe in yourself. You can do amazing things, don’t ever doubt that.”

“MP, your constant courage, drive, and passion will get you so far in life,” Tustin said. “You are not afraid to go for what you want, and that’s exactly the personality you need to succeed, especially as a woman in this field. Never stop believing in yourself and fighting for what you want.”

When asked about the impact of the senior class, Mizanin said, “Outside of the various athletic accomplishments that our seniors have contributed, the thing that has impressed me the most is their leadership. I think that each of our seniors are responsible for elevating their respective programs by being positive role models for their teammates and shaping a team culture that will last for years.”

To the seniors, Mizanin says, “Thank you for everything. This was my first year working at Arcadia, and the senior class has treated me like I’ve been here for years. They have been incredibly welcoming and fun to work with. They will definitely be missed.” 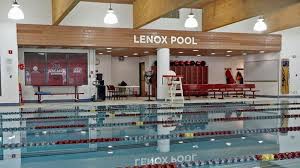 “There are a lot of personalities that will be missed,” said Mizanin. “This is a class that was full of quality people, who made you laugh and smile any time you talked to them. More than anything, I think people will miss their daily interactions with the seniors.”

Mizanin highlighted some members of the senior class – Pat Landrieu, one of the first seniors he met at Arcadia; Darren James, who provided countless laughs on Ask the Knights; Syd Cyr, as Mizanin said, “for being Syd Cyr.”

“The entire women’s soccer senior class were awesome and a blast to travel with for the NCAA Tournament. Vee Selby, Jess Kaye, and pretty much all the women’s lacrosse seniors were insane – I mean that in the nicest way possible.”

Mizanin brought attention to the senior student-athletes who were student workers with the Athletics Communications staff, saying, “My senior student workers: MP, Jamie, Courtney, Hunter, Mackenzie and Kaylee. They have all been a major help in our efforts to enhance the sports information department, and it’s been awesome to work with them. It’s tough to imagine working a game without them.”

“The athletic communications work-study seniors were mostly comprised of student-athletes and their professionalism and maturity made my transition seamless to say the least. This group is motivated to take every aspect of their individual collegiate careers to the next level by whatever means possible – athletically, academically, and extracurricularly – and it’s something I had not witnessed in my two previous stops before arriving at Arcadia.”

When asked about what the department will miss about the senior class, Taylor said, “It’s daily drive to be one percent better than the last for the benefit of not only themselves individually, but more importantly the teams and the University that they represented.”

To the seniors, Taylor says, “This is a time unlike any other that we’ve experienced in the world of collegiate athletics, and it especially hurts that it impacted this class in particular.”

“Each and every team that had its season cut short had built something over their previous three years that drove this department further and further up the national scale, but was still striving to take the next step by any means necessary. The department as a whole, not just the student-athletes and teams they represented, will be wondering what could have been during this time away.”

“Your legacy will live on in this department for years to come, for not only your past accomplishments leading up to this point, but for how you handled this unfortunate situation with such class and maturity. We would not expect anything less,” remarked Taylor.

“We’re going to have a huge gap to fill with the departure of our senior work-study student-athletes,” said Taylor. “Thank you for all of your hard work over this year and for making Arcadia feel like home for me from the beginning. All the best in your post-grad endeavors!”

When asked about the impact of the senior class, Ramirez said, “My time here so far has been short compared to some of the coaches and staff that have been able to see these athletes grow over the past four years.”

“They certainly have impacted my position positively as underclassmen may not know of our intramural and recreational programming, but a lot of the seniors came in to intramural leagues to have a good time. I always appreciate a positive attitude, especially with things that are intended to create a fun environment for everyone.”

“I will miss the overall friendliness of the class of 2020,” said Ramirez. “Many of them may not have even participated in intramural sports, but knew me through their teammates who did, and they were always fun to be around.”

Ramirez sent a shout out to two of his intramural refs and track/cross country student-athletes, Asya Alba and Myles Richardson.

“They work incredibly hard for their sports and still found the time and energy to come out and ref our intramural games. All-around great people.”

To the senior class, Ramirez says, “I am sorry to the spring sport student-athletes who had their final season cut short. I’ve played sports my entire life and know how competitive I wanted to be my senior year, so it’s tough to see this happen for you all. What’s more important, however, is the bonds you have created over these past four years.” 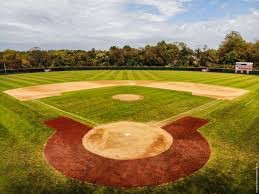 Skip Wilson Field on the campus of Temple – Ambler, home to Arcadia baseball.

“Friendships you have made with teammates will last much longer than your time playing sports ever will, so do not forget that. I wish you all nothing but the best in your future endeavors!”