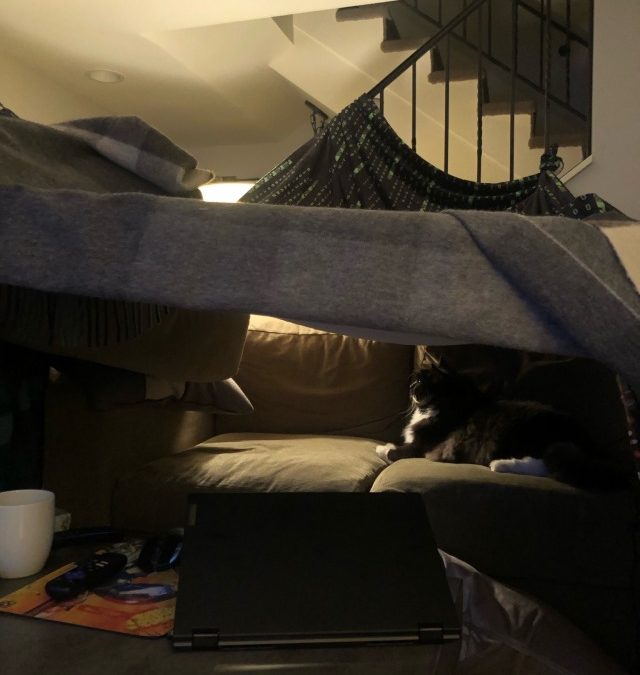 It was really, really tough to find motivation this week. Here in Denver, the weather was very nice at the beginning of the week, making it really hard to convince myself to stay inside like I’m supposed to and continue to work. However, I finally got around to filming some videos I’ve had in mind for awhile– before going into quarantine, I’d bought some cheap kids activities at Target like one of those Japanese Kracie Popin Cookin sets and some Orbees and even some Sea Monkeys of all things to give myself some easy video ideas that I could do from home. I filmed quite a few of those and am in the process of editing them, so I’m sure in coming weeks I’ll have more to post about those once I’m finished.

However, the video I did complete this week was not one I planned on making, but it sounded really fun and something I could do pretty easily– make a pillow fort. On the YouTube channel Unus Annus, which is run by Markiplier and Crankgameplays, they each made pillow forts in their respective homes as everyone is on lockdown right now and then challenged the audience to make forts of their own as something to do. I thought that sounded like a great idea and haven’t made a pillow fort since I was a kid and my family still lived at our old house, so I figured why not, you know?

Thankfully my house has a lot of blankets and I was able to build a fort I’m pretty proud of, and I’m also really grateful that the camera I borrowed from Arcadia before we left has an infrared feature, because it was pretty dark in my basement and it the fort and the infrared really helped film the experience so it wasn’t just 6 minutes of black video. My cat Winston was also really, really happy with the fort– he was unsure about it at first, but once he got in there he stayed literally the whole night and even into today, just sleeping next to me while I worked on my laptop. He’s a good boy 🙂

My goal for next week is to film some more videos and get the ones that I’ve already filmed edited, as well as finally get done some of the other work that I haven’t finished yet. See you next week!