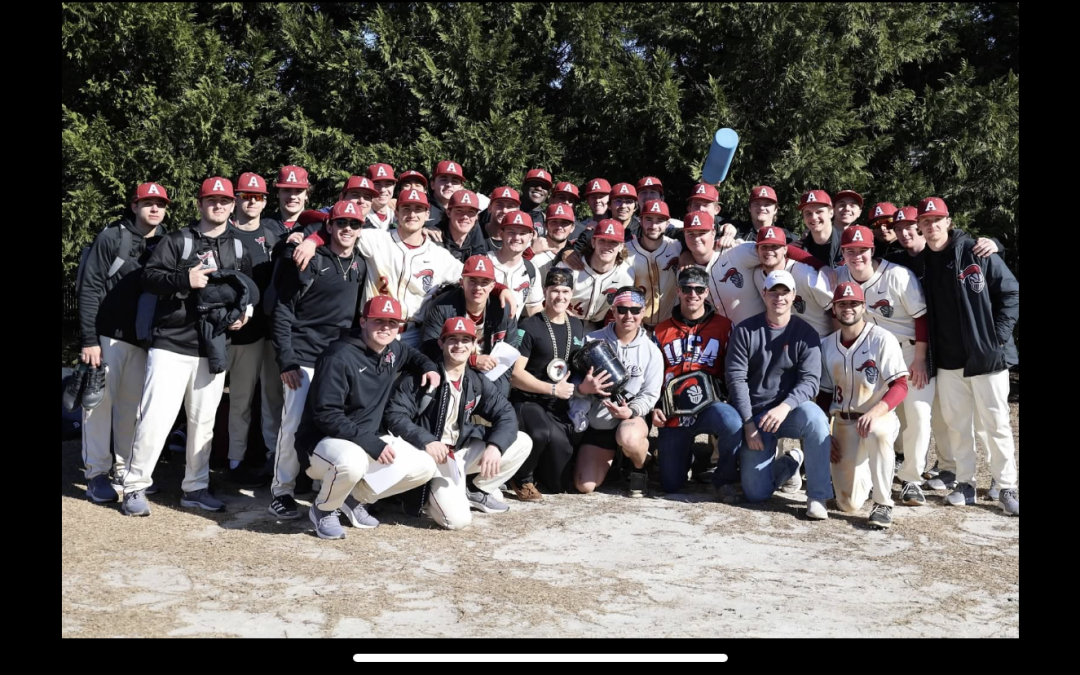 The Knights traveled down to Fayetteville, North Carolina two weekends ago to face three different teams. It was a cool experience for them as they have not had a trip since 2020 before the pandemic. The weather was in the 60s and sunny for the Knights. The first game the Knights lost 8-14 to Methodist University, there was a lot of anxiety heading into that game. The Knights had only played their first game of organized baseball outside a week before that. They fought a lot of adversity but in the end they came up short. After that the team won their next two games.

The first against Messiah University 10-1, the second game starter Hunter Sibley made his Arcadia debut throwing 6 innings giving up 2 hits, 0 runs, and striking out 7. It was a cool experience to see a division 1 pitcher throw a baseball. The Knights exploded on offense with 12 hits and 5 walks en route to their first win of the season.

They then faced Washington College, a team who loves to chirp at the other dugout. It was a challenge, every time the Knights seemed to score, the other team did as well. At times there were some momentum swinging plays on the other side, but the team managed to calm it down. Arcadia loves to make the small baseball plays that go unnoticed and that’s why they squeaked away with the win and let them win the weekend.

The week going into last weekend was fairly smooth, the team felt good with what they came away with. They fought the battles and won and were looking to sweep this time. That’s exactly what they did. They traveled down to Fredericksburg, Virginia for another host “tournament”. Zach Steiger made his first career start in the first game against the same Washington College, making his transition from the bullpen was tough. He gave up a couple hard hits, but he kept it within reach. When you give the Knight9 a chance to come back, they will chip away and pitch until they’re ahead. Nadell Booker came in and kept it close as well. That’s when Arcadia kept at them, they collected 7 hits and 4 walks, using clutch hitting and extra base hits to their advantage. That’s when Owen Margolis got his 2nd save against the Shoremen winning 7-6 and started their winning streak.

Hunter Curley Started the next game against Mary Washington University, where he absolutely destroyed them. He threw a complete game shutout, and would then go onto win the pitcher of the week honors. Arcadia beat them 9-0 and carried onto the next game. Sibley started again where he continued his scoreless innings streak to 12.0 innings while striking out 7 again, against Stevenson University. The offense helped out Sibley a little bit by producing 10 runs and easily winning the game 10-0. Their winning streak sits at 5 now.

The pitching that weekend was on another level. The Knights staff only gave up 1 walk and it was in the last inning of the last game of the weekend. That’s incredible strike throwing. Arcadia also had 27 hits, one for each inning played. One more incredible fact is that in the last game during infield/outfield practice they didn’t use a baseball. They pretended to field the ball and throw it in. The other team just had to watch them and make fun of them cause it just looked silly. They continued to lose by 10.

The Knight9 head into this weekend ready to continue their winning streak. They’re 5-1 and face Penn State Harrisburg at home for a doubleheader on Saturday and one game away on Sunday. It looks to be a pretty even matchup and some good weather. The home opener should be exciting. The Knights are off to one of the best starts they have had in a couple years. It is definitely because the culture has changed and they are finding ways to win.