Alexander Wilczewski: Post 4.5 Behind the Scenes of Halo: Acheron 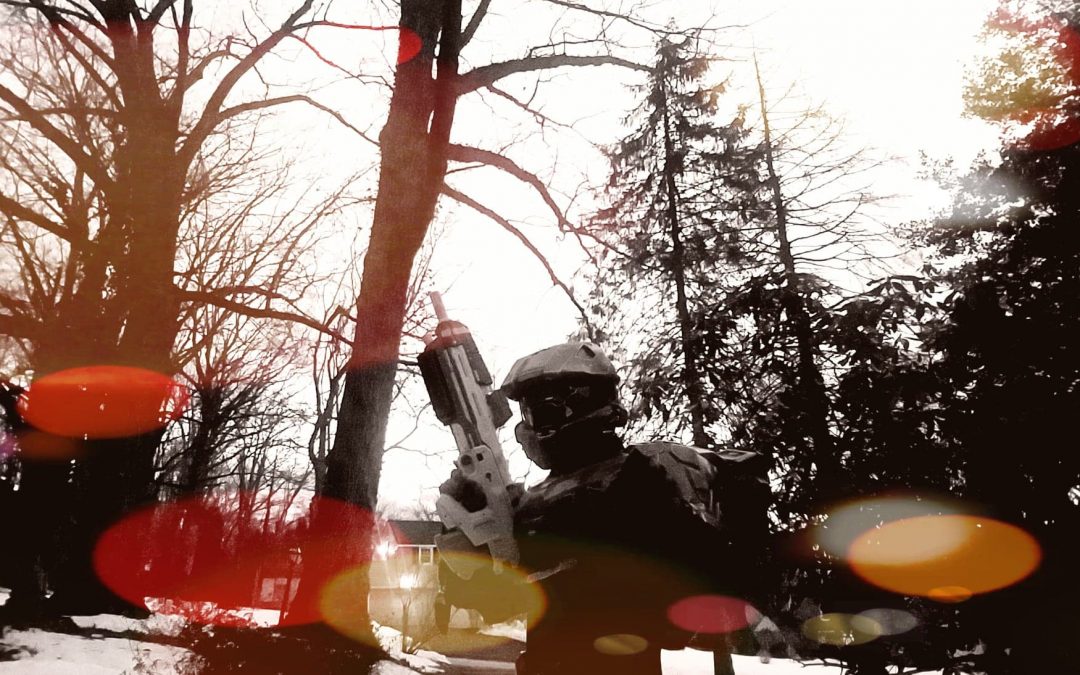 If you were to have asked me a year ago if I ever thought I would ever be making a one man production of a HALO fan film for a college senior project, in the midst of a global pandemic, with a budget funded by a defunct evil ex-president’s administration, with the actual voice actor for Master Chief lending his talent to me, I would have called you insane. Yet here we are with those exact circumstances all occurring at once and I’m actually in my final stretch of that journey. You already know what happened thanks to my previous blog posts, but now I’m here to fill you in on what’s happening as we speak, and what is going to happen within the next 48 hours.

As stated before this project has been mostly a one man production, with script writing, prop procurement, funding, location scouting, filming, editing, and everything else under the sun being done by yours truly. Turns out a global pandemic makes it kind of hard to get actors to come to your house and work in the spring cold for hours on end. Luckily I had a lot of friends to help me by lending their voices to my project and I found clever ways to incorporate them. Most of those ways were by having the majority of the cast of the movie already be deceased by the time the events of the film occur, and with me playing the dead bodies and my face being covered, I was able to superimpose their voices over my corpse footage and make it look like they had left a voice message on their body for the Master Chief to recover. As an aspiring voice actor, I was happy to provide my voice to much of the project, but it would have been a truly daunting task to have done every single character’s voice in a convincing enough way to make them all sound completely distinct from one another.

I have about 5 people not including myself all aiding this production with pre-recorded audio with the fifth being none other than the voice of Master Chief himself, Steve Downes. By contacting him through the app CAMEO and expressing my desire to create this college project and the propper funds being given through the app, I was able to requisition his talent for the film, lending a much needed element of authenticity to my project. His name adds star power to my film and allows me to focus on editing rather than attempting to emulate his one of a kind voice myself. In total he is probably reading about a paragraph and a half of dialogue, and I couldn’t be more grateful for his work. It’s an odd feeling having such a high profile actor lending his voice to my film, but it was even more interesting crafting my dialogue and story around his limited lines. Being done through an app and having him read my lines, I didn’t want to take up too much of his time or ask for too much, lest he perhaps decline the project. I settled on a paragraph and a half of dialogue for him as I felt that was the most appropriate for the time it would take. When the amount of words used are a resource to be measured, it really sharpens up the writing so not a moment has been wasted.

After spending around $600 on this project my budget was pretty much exhausted, and my original desire to use action figures as prop alien enemies had to be scrapped in favor or using footage from the games and editing it to match the look and style of the film. I made the clips black and white to match the rest of the film and made sure to capture parts of the game that matched my backdrop during filming. All in all I feel this was the best decision and has perhaps made the film even better.

Every aspect of this film has been born out of limitations, passion, and creativity, and has brought me to my breaking point, but in the best of ways. I now have more confidence in my own creative ability than I have ever had before, and I know that if I can make a film like this mostly by myself, that with others helping in the future to a greater degree, I can make something to rival the greats. Over the next 48 hours after this post goes up I will be adding the finishing touches to my project and should have it ready and live on YouTube by May 2nd. I look forward to seeing what the world thinks when they drop feet first into Halo Acheron.