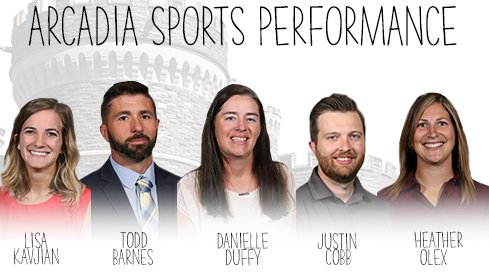 Director of Sports Performance and Head Athletic Trainer Danielle Duffy has been at Arcadia since 2014. She is in charge of all administrative duties within the athletic training department, and she also oversees the care of more than 300 student-athletes wearing the Scarlet and Grey.

When asked about the impact this senior class has made on Arcadia Athletics, Duffy said, “The class of 2020 made a point to raise the bar.”

“Early in my time at Arcadia, I would say that athletes and teams seemed thrilled at the idea of making it into the playoffs, whether that meant being in the top four or six in their conference. The class of 2020 chose not to settle for merely making it into something. They wanted to go, they wanted to prove something, they wanted to win a championship, or two in a row, and wanted to leave no doubt that Arcadia Athletics was no longer interested in a participation trophy – they wanted the big trophy, the plaque with the word Champions on it.”

Duffy takes the time to get to know each of her athletes, both athletically and personally. Whenever she works a game, you can always hear her cheering for the Knights and providing more encouragement and support than a typical athletic trainer would give you. But Duffy isn’t a typical athletic trainer – she goes above and beyond for her student-athletes, just like every member of the Sports Performance staff does.

When asked about what the Athletics department would miss about the class of 2020, Duffy remarked, “Hopefully nothing.”

“That sounds extremely harsh, I know. My hope is that athletes within the class of 2020 have influenced their teammates in such a way that the bar marking success will continue to be raised, people’s character will be battle tested and not waiver in tough times, a learned resilience will have Knights running through walls and refusing to take anything for granted. To quote Remember the Titans, “Attitude reflects leadership” – the class of 2020 has led, some far before their senior years, and that leadership helped create the necessary hunger and competitive attitude to be great.”

“I say all of that to say this – Arcadia Athletics will miss the daily interactions and making memories with the members of the class of 2020, but the strength of a building lies in its foundation. With the foundation the class of 2020 has built, with the purpose of holding things above it and keeping it upright, our programs will be able to build skyscrapers, finding much more success in the future.” 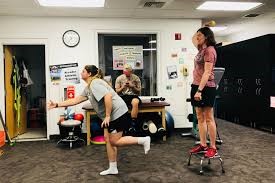 Assistant Director of Sports Performance Todd Barned has been Arcadia’s Head Strength and Conditioning Coach for nine years, after becoming the University’s first strength and conditioning coach in 2011. Barnes designs year-round strength programs for all of Arcadia’s varsity sports.

“The class of 2020 has had, and will continue to have a huge impact on Arcadia Athletics,” said Barnes. “During their four years, Arcadia Athletics has witnessed some of its greatest accomplishments. This class has helped put Arcadia on the map; from multiple championships to multiple additions of the athletics facilities, their impact goes far beyond that. The championship culture this class has helped to build has set the foundation for future success.”

When asked about what Arcadia will miss about the class of 2020, Barnes replied, “The department will miss this class’s leadership and work ethic the most. One of life’s greatest lessons is the ability to watch and learn from others. This current class demonstrated daily what great work ethic looks like, and how to be a leader.”

Associate Athletic Trainer Heather Olex saw the impact of the class of 2020 on Arcadia as raising the bar for classes to come, as well as leaving their programs better than what they were four years prior.

Olex addressed the seniors, saying, “Don’t let the way your senior year ended make you forget the many obstacles you’ve overcome to get this far and the memories you’ve all made together. You’ve built friendships and relationships that will last a lifetime!”

To the men’s volleyball seniors, Olex said, “Thank you for always making practices, road trips and games entertaining and fun.”

Olex also addressed the baseball seniors, saying, “Thank you for always ‘bringing the gas’ on and off the field!” 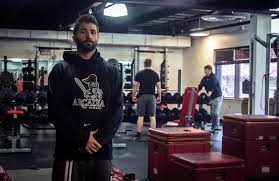 Assistant Director of Sports Performance/Head Strength and Conditioning Coach Todd Barnes in the old athletic weight room before the upgrades made in 2019.

When asked about what Arcadia would miss about this senior class, she said, “Their leadership on and off the field, as well as their love for the whole athletics department will be missed.”

Assistant Athletic Trainer Justin Cobb entered his first year as an athletic trainer this past summer, but had previously helped out the athletic training staff at Arcadia before.

“Based on my time with Arcadia being shorter than most, my answer might be a bit more short-sighted than others who’ve been here longer,” said Cobb. “However, the seniors I’ve worked with personally I can say are great leaders, who work harder than anyone on their teams. They set the standard for what was expected and spoke up when that standard wasn’t being met. I believe that sets the bar high for the next group of seniors and leaders, and really defines the term ‘Arcadia Strong’.”

To the seniors, Cobb says, “Don’t be afraid to continue being the leaders that you were on campus and with your teams outside of athletics and in your future endeavors. This world, now more than ever maybe, needs young adults who are willing to step up and speak their minds, to lead others, create real change, and to help re-shape society. Those changes start with each subsequent generation that is born. They don’t happen overnight, and as you enter the next phase of your life, you will see more opportunities to use your talents, skills, and personalities to help this world.”

“Don’t be afraid to continue being you, to keep working hard, and setting the tone for those around you.”

Lisa Kavjian, who also entered her first year at Arcadia this year, is an athletic trainer and serves as the nutrition specialist for Sports Performance.

Kavjian said, “This is my first year at Arcadia, so I don’t have any senior classes to compare to. But the interactions with the class of 2020 have set the bar high for future classes. The class of 2020 have shown amazing leadership qualities, both on and off the court. Younger classes see this, and it raises the expectation for them when they reach senior year. They have elevated what it means to be an Arcadia Knight, as they have made impressions both on and off the field.”

Kavjian said she appreciated the class of 2020’s passion and drive to get better every day, and that will be something the department will miss, too.

To the seniors, Kavjian leaves one quote about adulting from the iconic Michael Scott, the main character of the popular TV show The Office.

“And I knew exactly what to do. But in a much more real sense, I had no idea what to do.”