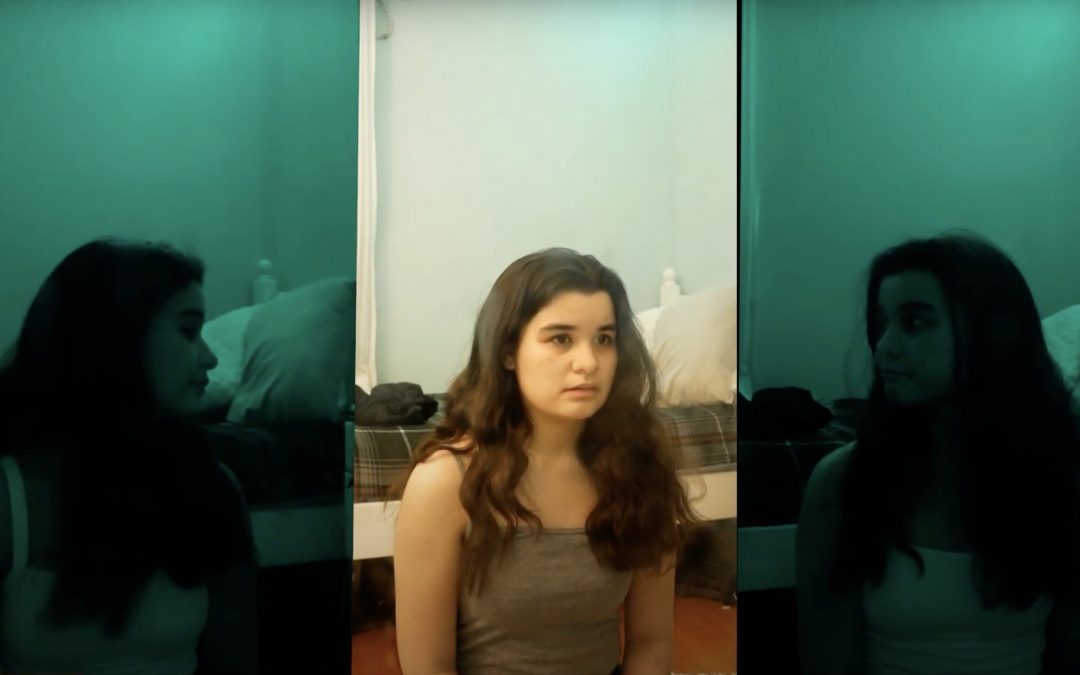 For this project, I created music for another student video. This video was about the appearance-related expectations that social media presents us with. Thematically, I saw this video as having two major ideas: solemn for the first minute and a half, and nostalgic and triumphant where the student is doing her makeup. Based on these emotions, I created two musical themes for the video while using the same electric piano I’ve been using on campus. The first musical piece of music is in the key of A minor since I feel that key is sad, and the second one is in E flat major since that key sounds particularly happy to me.

My process for this project was exactly the same as the last ones. I watched the video a few times and identified what the project was trying to accomplish. The first time I saw it was in class with the demo music that was on it, which meant that I was already familiar with the project and I had a rough idea of the type of sound that I wanted to create. I then watched a version of the video that had the voiceover but not the demo music. I was then able to picture a sound that would fit the specific themes of each part.

When I first sat down to record some music, I used the piano sound on the electric piano I’ve been using since that is the default sound function. I first experimented with different combinations of notes and chords together before settling on the chord progression A minor, G major, then F major (which puts this music in the key of A minor). I then played along to the video as I watched it, making sure that the music was not so busy that it overpowered the voiceover. As I’ve talked about in my other blogs, the trick with voiceovers is to emphasize the words being spoken with a musical ambiance. The music should be background noise, and not the listener’s primary focus.

After playing along for the first part, I then recorded some piano for the second half. I had more musical flexibility with this half since there was minimal voiceover and mostly just blank audio space to work with. With this part, I played more on a beat, and I accidentally ended up switching to a different time signature, 3/4 time (instead of 4/4 time like the first part). This basically means that the music in this half sounds more like what is typically heard in a waltz rather than in a rock song. While playing, I switched time signatures unconsciously. I thought I was in 4/4 the entire time until I listened to the recording again later while editing. I then used the same electric piano to record a strings sound for the second half, and I layered this orchestral audio on top of the piano sound to create a flowy, triumphant kind of sound to correlate with the makeup.

The challenges I faced while making this music were mostly related to the different audio levels from the different video clips. I had to change the volume on all of the audios to make sure the video sounded right. In past videos with a voiceover, the voice part was recorded in one sitting and was pretty even throughout. In this video, the spoken parts throughout were from different video clips, and they were at different audio levels based on the student’s position in relation to the camera. I tweaked these clips to make sure they were at the same level, and I also had to fix my audio clips. My piano recording for the first half was too quiet since the electric piano’s volume was down too low to be picked up by my phone camera. While in the editing process, I raised the volume of the beginning few seconds of my audio, and I lowered the volume gradually since I tended to play louder as the video progressed. I then lowered the volume a bit on the voiceover to make sure that the piano could be heard slightly in the very beginning. I also tweaked all of the audio clips to edit out any room noise that could be heard from them.

Aside from audio quality, I also faced a small musical dilemma that I’m sure most musicians have probably had at some point. I’m not the best at notation, so I mostly play by ear without writing anything down. Usually, when I listen to something again, I’m pretty good at identifying what key something is in just by how it sounds. But with this video, I caught myself very off guard. I originally thought that the music for the second half was in the key of C major, but I wasn’t paying much attention to the keys when I recorded it. When I went back to play the strings part, I was in a rush to get it done, and I had a moment of panic when I realized that playing along in the key of C did not sound right. I experimented with different keys and figured out that the music was in E flat major. I was then able to record the strings part for the video.

In relation to my other music compositions for my thesis project, I would say that this music is a combination of all of my music in one video. This project, the fifth video, was most similar musically to my third project (the stress Covid dream), which had multi-instrument sound editing and did not have a voiceover. This fifth video also compares to my second and fourth music projects (the Graveyard video and the magic-themed Covid dream), in which I created an ambiance to accompany the voiceover. This fifth video proved the challenge of combining both ambiance music with orchestral music for each of the parts. It was challenging at first trying to create two different musical themes for one video piece, but I thought that creating two themes was what worked best for the video.

When I showed this video in class, everyone liked it. They thought the music worked well and fit the video perfectly. This video was definitely one of my favorites (along with my third music project) and I hope to create more music like this in the future.