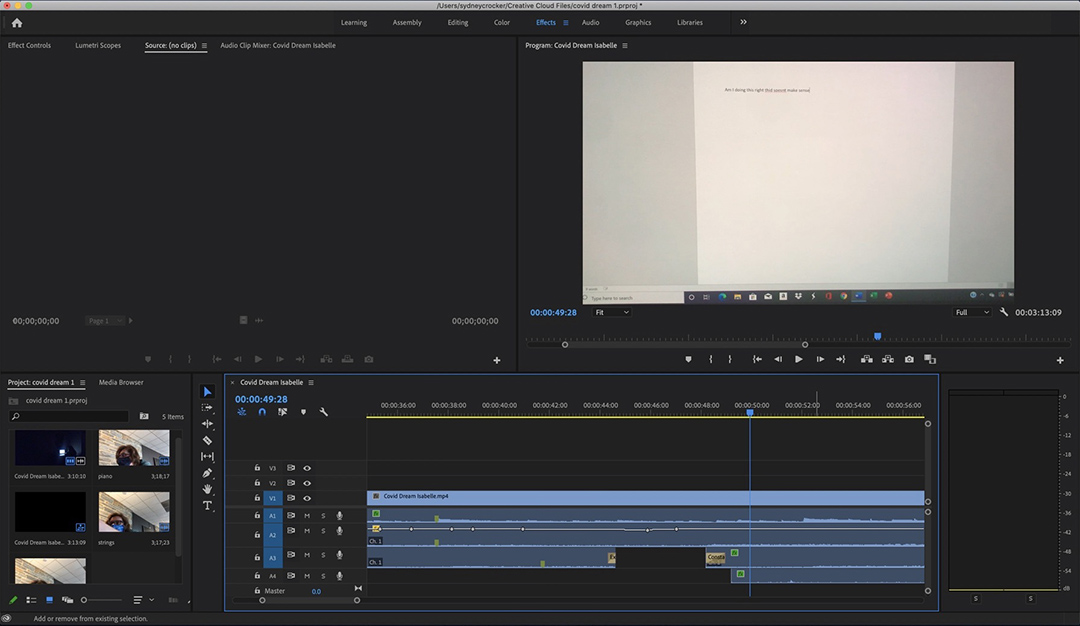 For this project, I created music for another student video. This video was a covid dream that was centered around the idea of stress. I used that theme to create a multi-instrument ambiance with plenty of harmonic tension (simply put, the tension between the different notes that are heard). I ended up using different sound functions on the electric piano to create a full orchestra, complete with choir.

I started with the piano sound, since that is the default sound on this piano. I played with an even meter (beat), since the video is very solemn and I felt it needed a serious track. I varied the rhythm slightly as I went along, but I kept it on the beat. I also wanted my audio to feel more expressive as it went on. I edited the video to put my audio in, and I thought it sounded pretty good as it was. But I felt like it was missing something.

As I continued to watch the video, I realized it needed an ambiance to create a dream-like state. So I went back to the piano, and I recorded the strings part that starts about halfway through the video. I edited that onto the video as well, but it still felt like it was missing something.

As I watched the video further, I was reminded of one specific song from the Disney film Frozen. Its opening song, Vuelie, is a choir with several parts of vocal harmony. I realized that that is what this covid dream project needed – a choir ambiance along with the strings. So I went back to the piano and recorded a choir ambiance. I edited that audio onto the video, and I tweaked all of the other audios to get rid of some background noise from the recordings. Finally, the video felt done.

The idea of multi-track music editing is something new for this video. In my other music projects, it hadn’t occurred to me to create using multiple layers of sound, so I had only recorded one piano audio for them. I felt that this project needed the extra ambiance from the strings and choir, and I’m glad the piano I used had the extra sound features.

The biggest challenge I faced with the making of this audio was the idea of the video not feeling finished. It was annoying trying to figure out what it needed, but when I finally figured it out, I felt accomplished. The other slightly annoying challenge was trying to figure out how to get the background noise out of the audio. Because I had used the camera on my phone to take a video of me playing, and I didn’t use any audio software or fancy microphones, there was a lot of room noise on the audio tracks. I was able to tune out some of the room noise, but not all of it, which can still be heard when playing the video on my phone instead of my computer. I also probably could have done this with my other videos since I recorded the audio in the same fashion, but this video especially needed the audio editing because of the extra room noise from all of the audio tracks combined. I also realized that I wanted this project to feel more like a dramatic short film, or maybe a scene from a longer professional film, rather than simply a student project.

When I showed this video in class, it was received well. All of my classmates liked the video, and the student whose video it was said she liked my track better than hers. Making this music was definitely one of my favorite video projects so far, and I hope to create more music like this in the future.