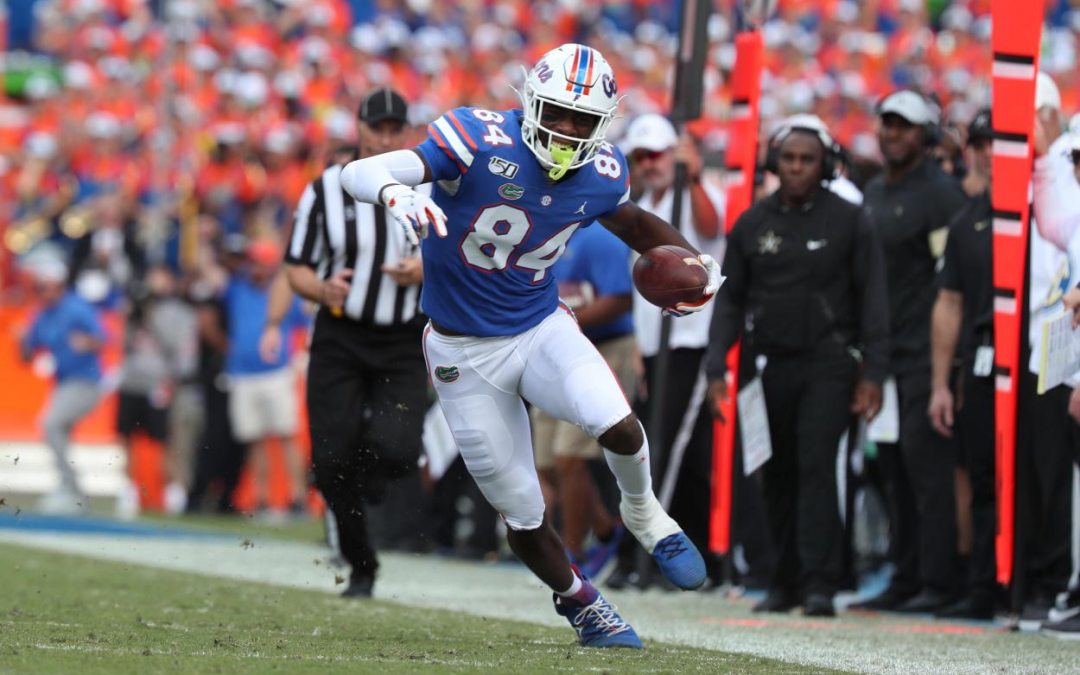 As we approach the 2021 NFL draft, I think it’s pretty obvious that the consensus #1 selection is Clemson QB, Trevor Lawrence.
This makes a ton of sense since Jacksonville is in need of a functional starting quarterback, which is probably the most valued position in all of football. With a star QB, you get the chance to turn a bad team into a decent one overnight.
However, being a top quarterback prospect in any given draft class doesn’t mean they’re the best player in said draft… not by any means.
(See the 2018 Draft where Baker Mayfield was picked first overall, before these high impact players: Saquon Barkley, Quenton Nelson, and Minkah Fitzpatrick…)
Drafting a QB is always a risk, and if I’m a GM with the first pick in the draft, I’m looking for the very best player to pick. Minimal risk with maximum reward. This is supposed to be the easiest pick of the whole process, and yet so many teams screw it up because they feel pressure to draft a QB, even when a player in a “less flashy” position is way more talented.
Some teams draft to build a complete, winning roster, while others draft to make the fans happy.
So let’s get to the point. I think the best player in the 2021 draft, in terms of talent, instant impact, versatility, and low-risk is Kyle Pitts (Tight End, Florida).
Don’t get me wrong, Trevor Lawrence is an excellent player and one of the better looking QB talents to come out of college in a long time, but Kyle Pitts is the safer selection. Here’s why.

Athleticism: Pitts is one of the better athletes to come out of college in the last decade. At 6 feet 6 inches, 250 pounds, with a 4.53 40 yard dash, he could be an absolute problem in the NFL right away with a rare combination of strength, speed, and massive size.
As impressive as those numbers are when evaluating a prospect’s athletic ability, the film on Pitts is even better. If you watch any game of his, especially from this past season, you’ll see that he’s more than just a big raw talent with some unique athletic ability. Kyle Pitts is a polished, gifted playmaker with elite athletic talent.
Pitts has exceptional tight end speed, great footwork, and elite level awareness when running routes and finding the open zones on the field. At several points in various games, he reminded me of a flashier Jason Witten.
I also want to point out two minor details that the average viewer doesn’t think about when watching a tight end:
1. Getting out of a 3-point stance with velocity and power and
2. Cleanly getting off of the line of scrimmage.
Pitts is exceptional at both.
Truthfully, it was rare to see him come out of stance slow, and he seldom was even touched while running a route downfield from the TE spot on the line. This wasn’t pure coincidence either, he just is that good with his footwork and using arm extensions to create space and explode from his stance. This is a big factor in terms of timing for the quarterback and can make a good tight end into an elite weapon on the field. This, seemingly, little detail to a TE’s game is actually extremely important, and most guys coming into the league have to spend a couple seasons working on technique to get to his point. Some never get quite there and don’t pan out as an NFL starter.
Also, if you watch any film from this past season, Pitts absolutely dominates teams and can take over an offense not only as a traditional TE, but he can also line up in the slot or as an outside WR. He showcases his versatility in just about every game, but his performance against #1 ranked Alabama this past season was unreal to watch.
Not only is he a force in the passing game, but he also displays his power and speed as a run blocker. He uses a strong first step, his big body, and power with his hands to handle DE’s easily (although his hand placement needs refining), and he has the speed and footwork to get to the second level and block LB’s effectively, which is extremely difficult to do since most tight ends don’t possess the same athletic ability Pitts has. Plus, a lot of modern NFL tight ends are either pure catchers or are used in run blocking situations. Only NFL greats like Rob Gronkowski or George Kittle (there are obviously more) are able to do both at a high level and, again, Pitts is already at an elite level with both skills.

Positional Impact: In the NFL, we’ve seen versatile, elite TEs make a massive impact on their respective teams. Travis Kelce, Zach Ertz, Rob Gronkowski and George Kittle are all prominent examples of guys at this position playing at a very high level and helping carry their offense towards the Super Bowl (Kelce, Gronk, and Ertz won theirs).
With that being said, the tight end position has a much higher value than people give credit for. In fact, TE is one of the hardest positions in the NFL to play since you have to block like a lineman and run/catch like a receiver (or be extremely good at one of those skills) in order to be good enough to make a roster. Pitts has all the tools that these elite guys mentioned have, and with time and development could turn into a really special player.
What I’m saying here is that a tight end who has speed, size, and the unique skill set to play any position on the offensive side of the ball is extremely valuable in the modern NFL. The best teams have a reliable, big time level tight end who can do everything, and those teams have made deep playoff runs or won Super Bowls. If you had a chance to take a polished, well-rounded, athletic monster on offense, you’d take him right? Kyle Pitts checks all the boxes and has the skill set to be an offensive threat in the NFL from day one.
Risk: Obviously, there is always risk when selecting any player in the draft. You never know how their game is going to translate from college to the pros, but there are sometimes guys that you can watch on tape and recognize greatness.
Earlier, I used the examples of guys like Saquon Barkley and Quenton Nelson, and that was for good reason. Back then even, I argued that Saquon was the best player in that draft class because of his athletic gift and once in a generation type talent as a playmaker. Quenton Nelson was THE best O-Line prospect I’ve ever watched and he’s quickly blossomed into an All-Pro player and one of the best linemen in the NFL, yet Baker Mayfield was taken first overall and has struggled to live up to the hype.
With that being said, having the first overall pick probably means that your team lacks talent all over the board and is in dire need of a weapon of some sort. You can’t afford to mess up the most valuable draft spot in the NFL, so why not take a sure-fire, impact player who going to make your team better right away? We’ve established that the TE spot is extremely valuable and highly utilized in today’s game, and Pitts feels like the next great.
Something else to think about when you factor in risk with a prospect is the level of competition they faced during their collegiate careers. Pitts played in the SEC, which is by far the best conference in NCAA Football and regularly faced some of the best teams in the country. Plus, he played for a program that isn’t regarded as one of the “top tier” schools at the moment, and still continued to dominate against ranked teams and SEC opponents.
Although Trevor Lawrence has played some of those great teams and has two National Titles, playing in the lackluster ACC should be a bit of a weakness on his resume. If you couple that with the fact that Clemson is probably the second best football program in the nation and he has had a team with some of the very best college athletes and talents surrounding him, then you really have to wonder if he is a definite star when moving into the NFL.
Now, I’m not arguing that Trevor has no chance in the NFL, but I think transitioning from star QB in college then to the NFL is extremely difficult, and a dominate athlete like Pitts should adjust much easier.

So, I’ve laid down my case. To me, Kyle Pitts could realistically be the best all-around player in this draft with the lowest risk factor. He could be taken #1 overall in several situations, but I know in my heart it won’t happen. Lawrence will go first and we’ll just have to wait to see how he pans out in Jacksonville.
However, don’t be surprised when a TE goes in the top 5 this year. This dude is insanely talented as a college player, and when a player like this enters the draft, there will be a plethora of teams that will want him.
Calling it now: Kyle Pitts will be a Top 3 TE in the next 5 years and will have HOF potential.
Happy NFL Draft Season!